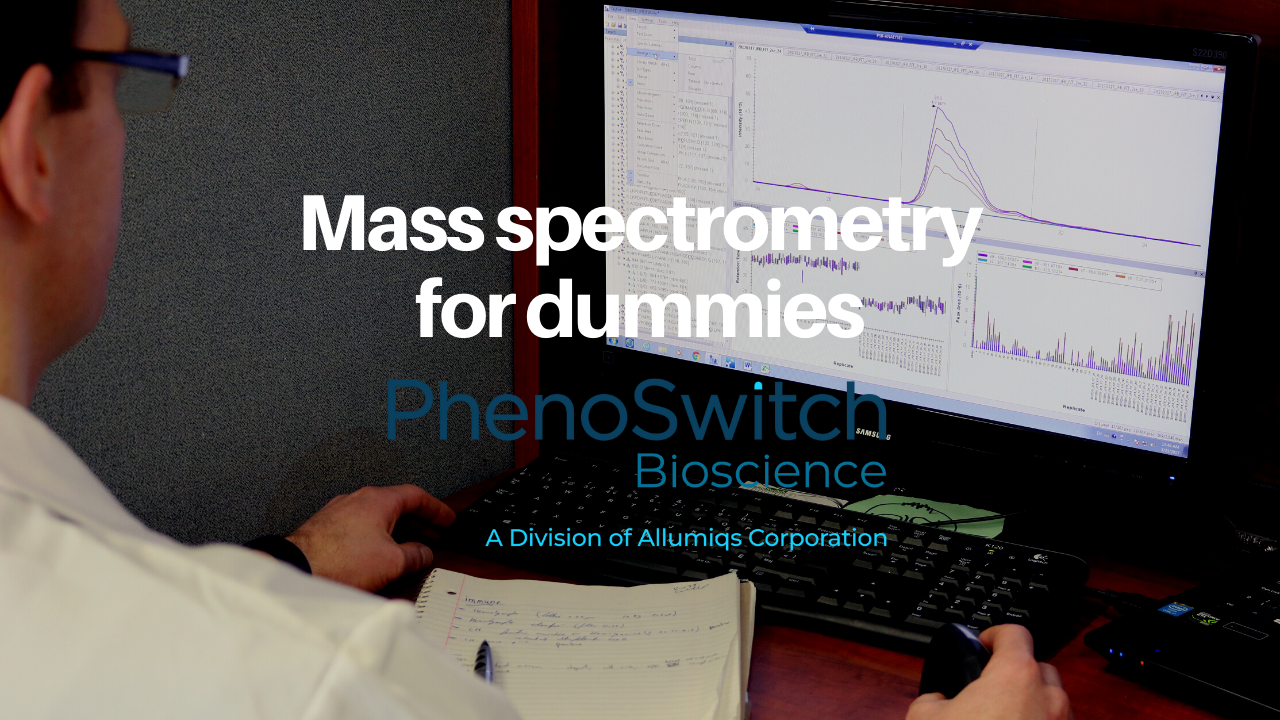 Mass spectrometry is a pretty complex science. In fact, it is so complex that some scientists even try to stay away from it and turn to basic molecular techniques to get answers to their questions. Well, dear colleagues, fear no more! We're about to answers 10 of the most frequently asked questions (FAQ) on mass spectrometry to demystify this amazing machine (and secretly make you like it!).

What you'll find in this article:

Question 1 : What is a mass spectrometer?

A mass spectrometer is a fancy scale. Of course, it is way, way more precise than your regular lab scale, but it serves the same purpose. When you put something in a mass spec, what you end up with is a list of masses, as well as an indication of their quantity (Figure 1).

In a modern mass spectrometer, a molecule will sequentially encounter 3 main components : the ion source, the mass analyzer and the detector.

Question 2 : What is tandem mass spectrometry?

Tandem mass spectrometry is commonly used to reduce the chances of getting interfering compounds that would pollute the signal of the molecule of interest.

Question 3 : How is mass spectrometry used?

This one is a little tricky to answer concisely, as there are a lot of different ways of doing mass spectrometry. You see, different mass spectrometry techniques require different sample preparation protocols and precautions. Also, even if we stick with one mass spectrometry technique like LC-MS/MS, there are several ways of looking at your sample. For example, if you want to look at only a handful of molecules and obtain a very precise quantification, you will have to perform the extraction of your molecules of interest from the matrix that contains them, clean them, feed them on the separation column, analyze them with a directed acquisition method such as MRM and get the data report. However, if what you're after is the identification of thousands of proteins from a cell extract, then the preparation, the LC and the MS/MS methods will likely be different. But if I had to describe how we generally determine how to use MS, I would go with the following points:

Question 4 : What can you do with a mass spectrometer?

The short answer is that with the appropriate mass spec, you can identify and/or quantify almost anything that is ionisable. For example, as mentioned earlier, you can get a very precise quantification of a molecule, even at sub picogram per milliliter. It is also possible to get relative quantification of several thousands of proteins, with a label free LC-MS/MS method called SWATH, with as few as three injection per sample. Or you can get the exact mass of your compound for quality control or research purposes. With the good method, MS can do a whole lot of things!

Question 5: How sensible is a mass spectrometer?

It really depends on your molecule of interest and on the matrix in which it is. But we can most definitely say that mass spectrometers are pretty sensible!

For a quantitative approach, the service provider will generally establish the linear range of detection of your molecule of interest and try to bring the test samples into range.

To do this, we can either use the sample as is, or concentrate/dilute it to bring is into the linear range. Therefore, there are not a lot of things that are either too concentrated or too low in concentration for a MS to analyze.

Question 6: When or why do you use mass spectrometry

You can use mass spectrometry when you need precision and/or resolution in your experiments. Also, for some applications, you don't have to rely on the availability of kits or antibodies to perform your study. For a more in-depth answer to this question, please refer to another blog post we wrote on the matter.

Question 7: What is the difference between GC-MS, LC-MS and CE-MS?

The GC, LC and CE in front of the MS refer to different separation methods for the analytes prior to their entry in the mass spec. In these cases, GC stands for gas chromatography, LC for liquid chromatography and CE for capillary electrophoresis.

Again, you should prioritize one separation method over the other based on the molecules you want to analyze and the type of separation needed.

In principle, yes, very accurate. Again, it depends on the skill of the team that will take care of the analysis, but overall, MS is one of the most accurate detection/quantification method available. It can also depend on the instrument that you use. To do a simple analogy, you won't have the same image quality if you watch your favorite movie on a TV from the 1990s or on a brand new OLED 4K UHD television. The same applies with mass spectrometer. If you take a low resolution mass spectrometer, you may get blurrier results than with a brand new high resolution instrument.

It may look like it, but it is not. Considering everything that you can squeeze out of a mass spec analysis, it can be a much better investment than classic molecular biology techniques. See, MS by itself can not really do much more than give you the mass and the amount of something in your sample. However, when you combine it with other techniques, it can pack a lot of bang for the bucks.

For example, in one injection, MS can provide quantitative information on every  interaction partner of your protein of interest or on the metabolism of a drug by providing quantification for several of it's metabolite. Therefore, in one experiment, you can possibly multiply the amount of results you get by a lot.

If you want it to be, then yes, MS can be quantitative. To do so, the operator will choose an acquisition method that allows the quantification of your molecule of interest. Of note, this quantification can be either absolute or relative.

There you have it. These were ten of the most frequently asked question that we get. If you ever have a specific question to ask us about MS, just do so in the comment section below!

10 reasons why you should choose mass spectrometry to study your molecule of interest It is no...
Read More

How to optimize your sample preparation technique for mass spectrometry

Sample preparation for mass spectrometry What do you mean "I cannot just put the sample in the...
Read More

Quantitative proteomics using SWATH: What is it and how it works?